The Viper Mk VII is the updated model of the Viper Mk II originally used as the first line of defense against the Cylons. The first years of conflict between the Twelve Colonies of Kobol and their Cylon creations, which came to be known as the First Cylon war, took a massive toll on the Colonials. But after 12 years of fighting, without warning, the Cylons sued for peace. Following this unexpected armistice, an uneasy military put all its efforts into upgrading its massively depleted force. Now fitted with a fully networked software and CNP (Command Navigation Program) system, the Viper Mk VII was considered the most sophisticated craft in the Colonies.

The ship comes complete with a 16-page[1] collector’s magazine providing an in-depth profile of the ship, exclusive behind the scenes articles, original design sketches, and an interview with the series developer, Ronald D. Moore. 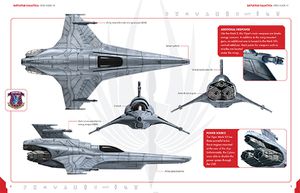 Interior spread from the magazine.

The collector's magazine for this item features: